skip to main | skip to sidebar

Last week we made the difficult decision of putting down our beautiful 13 year old Lab, Angel. Until I find the right time and words to write a commemorative post about her, I am re-posting one I wrote for another blog quite some time ago. This may say it best. 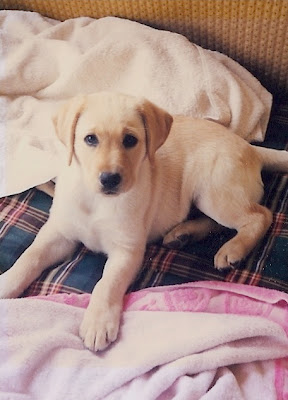 (This blog post was originally published on January 1, 2010.)
I was kind of in the mood to gripe about a few of my pet peeves, like:

or, rude and sullen service people who mutter (without even glancing up from their task at hand) things like "what's up" when you go to pick up your passport photo at Walgreen's. And I don't mean a friendly, cheerful "hey, wassup!" ... I mean a "what-the-hell-do-you-want-lady, you're-bothering-me" what's up.

Or, sheesh, they can send a man to the moon but nobody can figure out how to make a garden hose that doesn't kink,

or, clueless grocery shoppers who abandon their carts in the middle of the aisle as they wander off to contemplate nutrition labels,

or, the fact that we are always knee-deep in dog hair at our house, despite endless vacuuming.

But that last pet peeve got me to thinking about the pet that causes that peeve and then I started feeling less bitchy and more, well ... all mushy inside. The source of all that dog hair is Angel, our 12 year old yellow Lab. Baby Girl, Mike calls her. But our Baby Girl is getting on in years. And, oh dear ... that makes you think. And now I don't so much feel like bitching about petty stuff anymore.

Angel came to us as a 9 week old pup in 1998. Elizabeth was 10 and we had promised her a puppy when we moved to Austin; she in turn promised us she would be responsible for taking care of this dog. Parents 'round the world? Does this ever happen? (raspberry sound here) Elizabeth named Angel after her favorite food at the time, angel HAIR pasta, and after a couple of shedding seasons it became clear that Elizabeth's name choice was a littl

e joke from the universe. Shouldn't we have taken the "hair" part of that name inspiration and called her Harriet? Especially since Angel seemed a poor choice for the naughty youngster she was. But as she got older, it was evident Angel was a perfect name as she became our gentle, patient, devoted companion and protector.

She's not been an especially healthy or low maintenance dog however, and she has cost us a small fortune in vet bills, especially in contrast to our miniature dachshund, Rosemary, who's never had a sick day in her life (and who sometimes uses Angel's ass for a pillow; above).

Angel takes the prize for ear infections, chronic skin allergies, compulsive licking, paw chewing, and scratching. She often wears toddler's socks (pictured above) to keep her from gnawing paws raw. She's been on an expensive allergy medication for several years now ($50 a month) and does an occasional course of steroids for bad flare ups. As you can see, she's never particularly happy about all this. In September she tore her acl and had surgery, a big deal for an older dog because the recovery process (below) is intense. Again, not happy. She's hobbling a bit but doing pretty well now! For an old Baby Girl.

But the shedding. Ack! I find blond dog hair in my morning coffee and on my pillow at night. I even found one in the microwave the other day. My slippers, which are not the furry, fluffy kind, are furry and fluffy. And our clothes ... well, suffice it to say we have a lifetime supply of lint rollers which are strategically stationed throughout the house.

Angel is a year-round shedder, even shedding great gobs in winter when other dogs are smartly building up and hanging onto their winter coats. You can see the hair falling off blizzard-like when she strolls by. I could stuff a sofa with the hair I collect after I brush her on the back porch. I often throw fistfuls of it into the yard and come spring, the birds snatch bits of it to line their nests. In the fall we find these empty nests in the naked branches of trees and we tell Angel that she has made a loving contribution to the comfort and protection of tender fledglings, who will soon be the parents of more fledglings come next spring. And on and on.

I often complain that I wish I had back all of the hours I've spent on extra vacuuming over the years since we've had Angel. I don't really. She has been worth every minute of it, worth every penny spent at the vet, every moment devoted to her convalescing, every chewed up Bally shoe and every Barbie ensemble ingested as a puppy. The best part is that we can say this now, while she is still with us. We can nuzzle her neck and tell her how important she is to us. She has been our mentor, showing us how to love. Showing us how it's done.

There is such an abundance of Angel hair blowing about our yard that long after she is gone someday, the birds will still be lining their nests with Angel hair every spring. When we find those abandoned nests in fall, our hearts will swell and we will tell Angel again: you always did and always will make a loving contribution to the comfort and protection of tender lives.


That's what Angels do.

Posted by Michelle Wells Grant at 1:12 AM

Louis and Rosemary want to know if there's any more turkey. (Just asking.) Glad you write.

I'm so sorry for the loss of your lovely Angel. No matter how long we have them, it's never long enough.

I loved this. I have a thirteen year old lab-pitbull and have written a similar article. I only know (marginally how) to write humor. But I think you would enjoy it as we touched on the same things.

I'm sorry for your loss, but so happy Angel brought you so many years of joy. Why can't they live longer - healthier. Must be to teach us something, but I hate that kind of learning.

Michelle Wells Grant
Also known in some circles as Bugs, I'm a writer, artist, wife & mom, dog lover and hamburger afficionado. In other words, I'm all over the place.

Dogs are people too. These are mine.